As It Is Written, Audio CDs 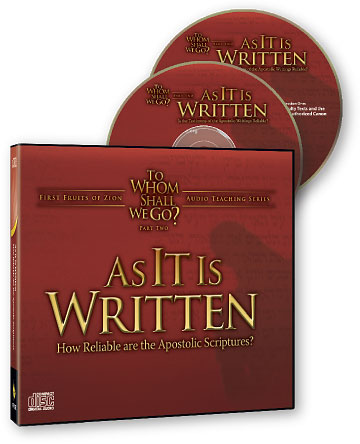 How Reliable are the Apostolic Scriptures?

To Whom Shall We Go, Audio Volume 2

As it is Written includes audio recordings of three sessions from the First Fruits of Zion conference To Whom Shall We Go? Examining Objections to Yeshua. In these sessions, Toby Janicki attempts to tackle some of the major issues surrounding the reliability and credibility of the Apostolic Writings and the testimony of the Messiah presented therein.

In Matthew 13:52 Yeshua tells His disciples that those who are competent in Jewish tradition and Biblical exegesis will be able to shed light on Messiah and His Kingdom. Many of the misunderstandings about the Gospels and Epistles result from our failure to read them with Hebraic eyes. Sadly, this failure has caused some to question Messiah and the testimony of His words. As It Is Written demonstrates that the Apostolic Writings and the concepts and argumentation found therein are completely consistent with both ancient and modern Jewish teaching.

Faulty Texts and the Unauthorized Canon: Where do the Apostolic Writings come from? Do they really present an accurate portrayal of the Messiah, or are they made up stories composed by anti-Semitic church fathers?

As it is Written: Did the apostles misapply biblical prophecy by removing it from context to support their claims? Toby Janicki discusses objections to Yeshua as presented by the most classic anti-missionary book of all time by examining several biblical proof texts and comparing them with the midrashic method of exegesis.

The Exalted Rebbe: Anti-missionaries object to the exalted status of Messiah in the Apostolic Scriptures. Toby Janicki investigates some of the toughest concepts in regards to Messiahship of Yeshua from a rabbinic and Chassidic perspective, including hard questions about Christology, the need for a mediator, and the two comings of Messiah.