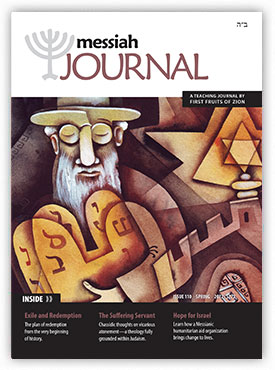 Reflections on the past and future as First Fruits of Zion celebrates its 20th anniversary.

Origins of Supercessionism in the Church (Part 2)

Part 2: James Pyles continues in this second part to dig into how supersessionism is woven into the very fabric of Christianity, particularly classic reformed Christianity.

Russ Resnik continues his in-depth study on putting the the Greatest Commandment into action.. The Shema calls us to intense personal devotion as part of intense communal devotion. To discover such devotion amid the distractions and competing voices of the postmodern age requires a profound response to the first word of the great commandment: “Listen!”

Exile and Redemption in Genesis

Aaron Eby looks at the broader picture of themes of exile and redemption in the the book of Genesis. The strong allusions in the Genesis narratives of the patriarchs to the exodus from Egypt draw attention to its centrality and timeless, prophetic significance.

Toby Janicki surveys the teachings of Rebbe Nachman of Breslov on the concept of the suffering tzaddik to get an idea of how this was perceived in at least one Chasidic circle.

It has been said that Shabbat preparation is not for the faint of heart. As rewarding as Shabbat is, there are times when getting ready for it it can seem positively daunting.

Learn how this organization is making a difference in the lives of believers living in the land.

Joy and the Torah

Vine of David presents another installment in this series of articles by Paul Philip Levertoff's classic study, "Die religiose Denkweise der Chassidim," The Religious Ideas of the Chasidim.

The Case of the Forged Inscription

In a trial that lasted seven years, an Israeli judge delivers a final verdict. What bearing does this have on the discovery of the first-century ossuary that bore not only the name “Yeshua,” but also testified that “Ya’akov” was his brother.

An interview with Aaron Kasdan, a member of the core group that has been planning the Asheville Music Festival (AMF).