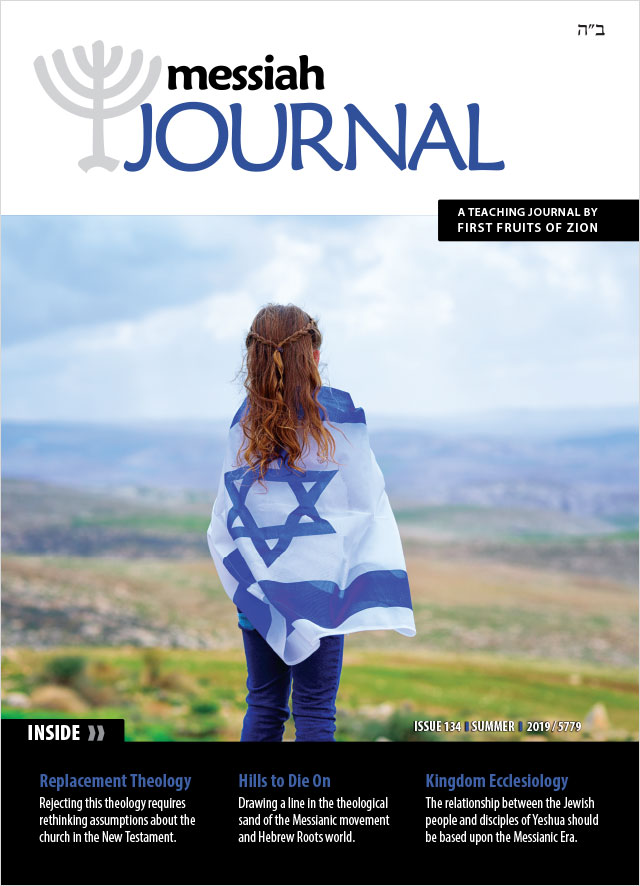 Boaz Michael introduces what could be an issue of Messiah Journal that stirs the pot of Messianic Judaism once again. He lays out the foundation of distinction theology lovingly and concisely.

This article is a transcript of one of D. Thomas Lancaster's lectures at Malchut 2019, FFOZ's first conference for FFOZ Friends and Torah Club Leaders. In it he details what replacement theology is and the basis of its tenets and artfully rebutts the arguments with solid Messianic Jewish interpretation.

The Biblical Blueprint of Peoplehood

If we are going to replace replacement theology within the body of Messiah, we must have something with which to replace it. Aaron Eby details the antidote: proleptic radial ecclesiology. The early community of Yeshua's disciples never conceived that their religion was separate from Judaism. At Malchut 2019, Aaron's lecture describes what they had in mind as a fufillment of the prophecies about the kingdom.

Distinction Theology and Diversity in the Communities of Yeshua

What does it mean to be a Gentile disciple of a Jewish Messiah? D.Thomas Lancaster sorts through Messianic Judaism's competing ideas about the nature of a Gentile disciple's relationship to the Torah and the Jewish people.

Changing and Living a New Narrative

Ryan Lambert introduces us to modern scholars and institutions that are changing the way Christianity reads and applies the New Testament. The slow process of shifting to a post-supersessionist view is picking up speed.

Hills to Die On

Not everything is worth fighting over, but some things are. Toby Janicki details some dangerous theologies in the modern Hebrew roots and Messianic Jewish movements and why First Fruits of Zion believes that it is necessary to take a stand against them.

Toby Janicki presents the next installment of "The Path of the Messianic Gentile" and discusses the implications of Gentiles taking on the mitzvot that are specificly Jewish identity markers such as wearing tzitzit.

On Earth as in Heaven

Part one of a two-part discussion by Aaron Eby on a Messianic Jewish perspective of the Lord's Prayer.

D. Thomas Lancaster's fourth sermon excerpted from his forthcoming book Holy Epistle to the Hebrews: A Messianic Jewish Reading. He unwraps some deep mysteries from Hebrews 1:1-3.

Flag of the Kingdom

Part 22 of the story of Bram:The Life and Wisdom of Messianic Jewish Pioneer Abram Poljak in His Own Words.