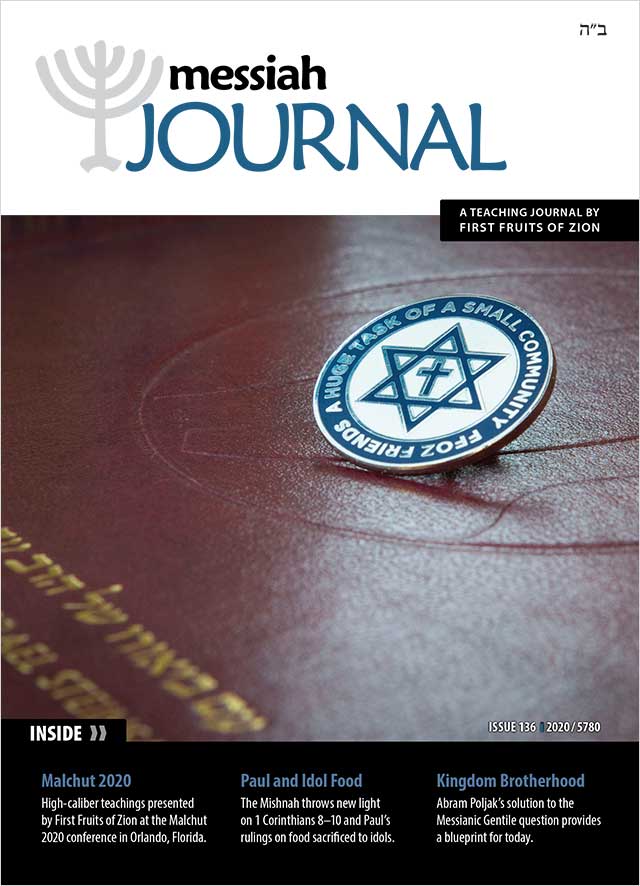 Boaz Michael shares portions of his lecture from Malchut 2020 along with a summary of the contents of this issue of Messiah Journal.

The Believer and Idol Foods

Jeremiah Michael presents a conceptual parallel between 1 Corinthians 8-10 and rabbinic writings regarding the status of meat sold in the marketplaces. He shows how closely aligned Paul was with the Jewish thought of the day when addressing his understanding of conscience in the face of idolatry.

In his first lecture at Malchut 2020, Daniel Lancaster took the audience on a journey through the early years of Christianity and the progression of how the church lost sight of what the kingdom is that Yeshua came proclaiming. Read how the writings of the church fathers steered the church away from the literal kingdom of heaven and toward supersessionism.

What to Expect When You're Expecting the Messianic Kingdom

Aaron Eby lays out a glimpse of what the Messianic Kingdom will be like according to the prophets. He reminds us that there are signs to look for, but stresses that we are still looking forward to the complete redemption.

We Want the Kingdom Now

In Aaron Eby's second lecture at Malchut 2020, he clearly presented the defining characteristics of proleptic kingdom communities. He offers a blueprint for bringing the kingdom down to earth and hastening the day of redemption.

The Future's So Bright

Torah Club Community Care Director, Damian Eisner, shares a message of hope based on Yeshua's gospel: "The kingdom is on the brink of arrival." If we still believe that, positivity is the message of the day. The kingdom brings a very bright future.

Torah Club Director, Ryan Lambert, defines the term "Judaizing" and makes the case that Paul was the greatest Judaizer of all the apostles. At the same time, he lays out Paul's vision for the mixed community of Jews and Gentiles.

In the final lecture of Malchut 2020, Daniel Lancaster inspired the audience with an eloquent summary of Messianic Jewish pioneer Abram Poljak's vision of an international organization of Christians and Jews. It offers a historical model to emulate.

Guest writer Stephanie Quick, writer and producer serving with Frontier Alliance International, shares an essay on eschatology through the eyes of Hudson Taylor, Charles Spurgeon, George Müller, and other great missionaries of the late nineteenth and early twentieth centuries.