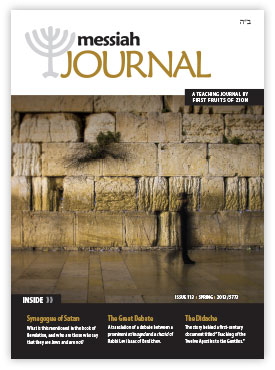 "You might not see it from where you are at, but I can see change at work. Some really amazing and wonderful things are happening... . Never before in the history of this movement and message have so many things been coming together--the merging of thought, so-to-speak." Boaz shares his thoughts on what is happening in the movement.

The Son of Joseph

Examine the significance of the Joseph story and the exile in Egypt in light of the gospel, the current exile, and ultimate redemption. Aaron Eby continues his series Prophet of the Second Temple Period with his article "The Son of Joseph." Eby surveys the Joseph narratives of Genesis and finds parallels to the life of Yeshua and allusions to the concepts of exile and redemption.

Take a critical look at the Protestant mantra of "faith alone" and its relationship to the message of Torah and Messianic Judaism. Jacob Fronczak gives us his next installment of The Five Solas. In part two of five he exposes some misconceptions surrounding sola fide which is the theological concept that sinners can be justified (i.e., saved) by faith alone in the atoning death of Jesus Christ.

The Synagogue of Satan

D. Thomas Lancaster provides some important context for the expression "synagogue of Satan" which appears twice in the book of Revelation and is often used as an anti-Semitic slur or today wrongly applied to Messianics.

The Didache: An Introduction

Toby Janicki gives a sneak peek into the upcoming Vine of David commentary on the Didache. In the preview of the introduction he argues that the Didache was written for first-century Gentile believers to introduce them to Torah life.

Do You See What I See?

Messianic Jewish Rabbi Stuart Dauerman takes a roundhouse kick at conventional church teaching regarding the Jewish people, eschatology, and replacement theology. Learn how Christian supersessionism minimizes and distorts God's dealings with the Jewish people and erodes the foundations of Christianity itself.

The Crypto-Messianic Jews of Israel

K.J. Krueger seeks to bring correction to the many Jews within the Messianic movement in Israel that have left community and fellowship for various reasons in her article.

Tzvi Zadan, author of The Concealed Light, offers up some sample chapters from his forthcoming book Jesus in Modern Culture, where he explores the complex relationship that non-Messianic Jews have with Jesus and how that complexity is expressed within contemporary Jewish society.

The Idea of a Chasidic Born-Again Experience

More book reviews: Two reviews focusing on the Sabbath: The Gift of Rest: Rediscovering the Beauty of the Sabbath, by senator Joe Lieberman, and 24/6: A Prescription for a Healthier, Happier Life by Matthew Sleeth, as well as a review on the new book, Introduction to Messianic Judaism.