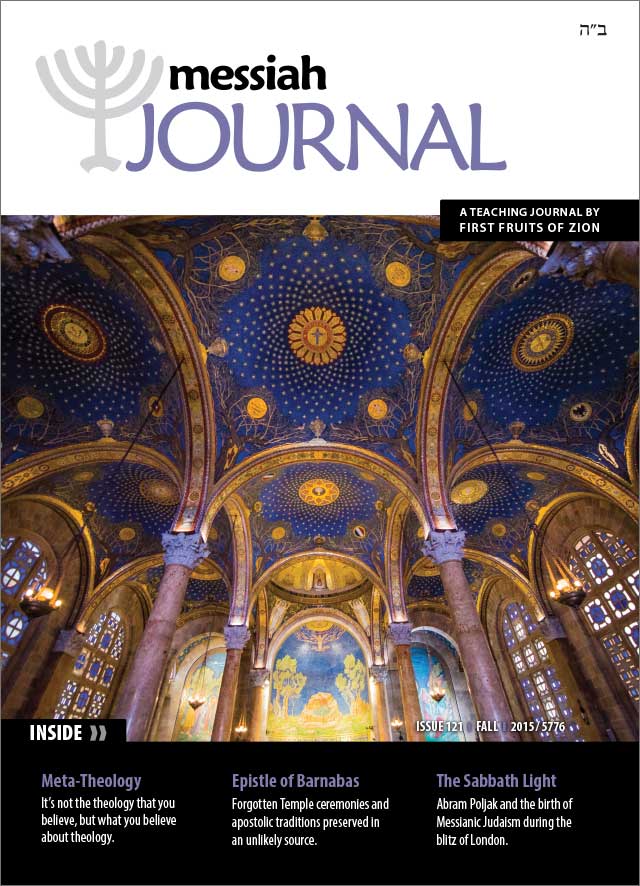 Boaz Michael presents seven ways to bend toward others with whom we may have significant differences while still being true to ourselves.

This month has some interesting and poignant comments from our readers across the globe.

Toward a Messianic Jewish Theology

Jacob Fronczak begins another exciting series in the quest to establish a consistent and authentic theology for Messianic Judaism. Part 1 delves into the dizzying concept of Meta-Theology by comparing it to the mathematical paradoxes found in the hard sciences. Fronczak disects the arguments and puts them back together in a neat, understandable package.

Promises to Abraham, Isaac, and Jacob

Rabbi Carl Kinbar wraps up his series on the promises to the fathers with a thoughtful commentary on the promises God made to Jacob. He takes us through the events in Jacob’s life to show how the blessed became the one who blesses. This series is inspired by the thoughts of Abraham Joshua Heschel, a shining light of Judaism in the second half of the twentieth century. Heschel was driven by an extraordinary passion for God and a concern for humanity, both of which were evident in his prophetic role among Jews and Christians.

Lechah Dodi: Redemption in the Song of Shabbat

The practice of welcoming the Shabbat grew and developed into the service known today as Kabbalat Shabbat. The crescendo of this prayer service is the beautiful poem Lechah Dodi. Jeremiah Michael provides a verse by verse pathway through the plan of redemption present in this traditional song.

D. Thomas Lancaster and Sheldon Wilson team up to introduce us to an ancient apocryphal writing titled Epistle of Barnabas. Although much of the book has been redacted to show a strong anti-Jewish agenda, chapters 7 and 8 preserve an untouched glimpse into the ancient ceremonies of the Day of Atonement and the red heifer.

The Messianic Era and the Days of the World to Come

We continue the translation of Messianic luminary Rabbi Yechiel Tzvi Lichtenstein’s work on the Messianic Era and the World to Come.

Part 7 of the story of Abram (Bram) Poljak, one of the founders of modern Messianic Judaism. This installment takes us to London during the height of the bombings of World War II where Abram Poljak led a small Sabbath Fellowship in the face of grave danger.