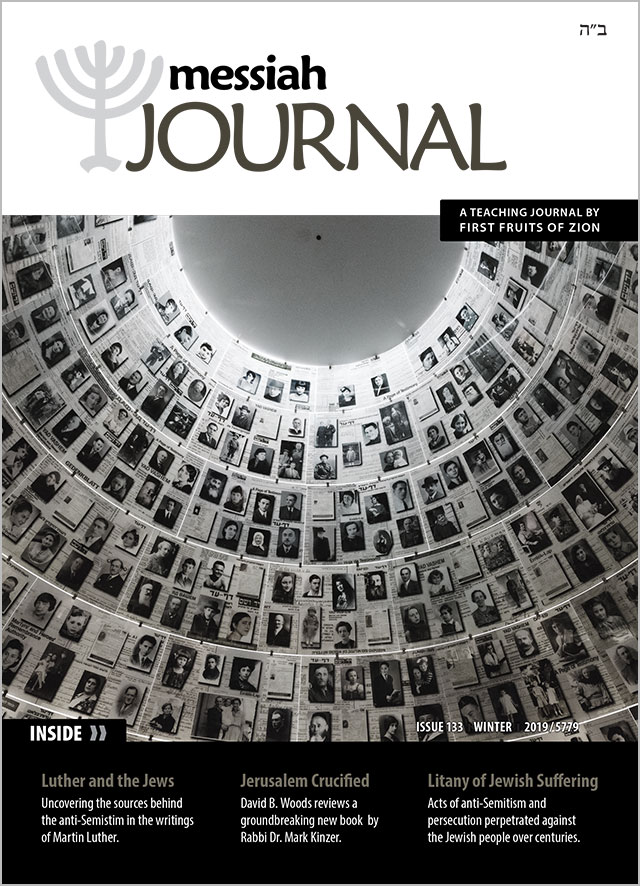 Director’s Letter: The War against the Jews

Boaz Michael comments on recent ant-Semitic attacks in the US and briefly outlines the contents of this issue of Messiah Journal dedicated to the millions who perished in the Holocaust.

Jacob Fronczak writes a poignant piece on the resurgence of anti-Semitism in the United States and the casual attitude surrounding it.

Son of a Nazi, Son of a Wizard, Son of a Terrorist

D.Thomas Lancaster tells the stories of three men who were transformed by love and the power of God. All three had been taught to hate the Jewish people. Read how the message of love can save the world one broken soul at a time.

Luther and the Jews

Dr. Richard Harvey uncovers the sources behind the anti-Semitism in the writings of Martin Luther. Far from the myth that Luther's health and psychological state caused his hatred, we learn that he never wavered from his ideas from the beginning of his life to the end.

A Litany of Jewish Suffering

The true picture of the brutal war against the chosen people is revealed in this sobering list of pogroms, violence, and expulsions from 70 CE to 1992.

Exaltation of Messiah in the Book of Hebrews

D.Thomas Lancaster brings us another installment from his forthcoming book on the book of Hebrews. This article expounds on the first three verses of chapter 1.

God and the Universe

Part 2 of a never-before translated excerpt from the Even Tzohar Rabbi Yechiel Tzvi Lichtenstein’s nineteenth-century treatise on Messianic Jewish theology and philosophy.

Part 21 of the story of Bram:The Life and Wisdom of Messianic Jewish Pioneer Abram Poljak in His Own Words.