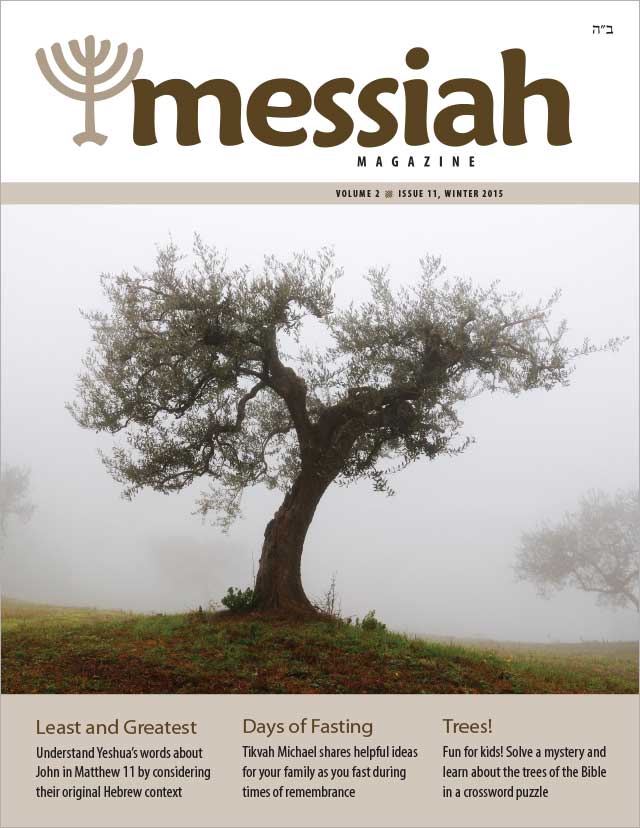 Download Issue 11 of the new Messiah Magazine as a PDF.

First Fruits of Zion’s award-winning Messiah Magazine presents introductory-level articles about the Jewish Roots of Christianity. This full-size magazine is beautifully illustrated and designed with full color photos and simple, engaging, easy-to-read articles about the basics of Messianic Judaism, the Torah, the Sabbath, the Festivals, and the Jewishness of Jesus.

Boaz Michael, founder and Director of First Fruits of Zion, shares thoughts about the recent wave of terrorism in Israel and introduces the Bram Center project.

A new section in the magazine where we do interviews with travelers coming to Israel. This month we have visitors from Missouri and New Hampshire.

Israel and Christian Theology, Part 3: Who Is a Jew?

In this series of articles Jacob Fronczak poses the question of the definition of a Jew. It's not as cut and dried as one might think. Jacob goes on to engage the discussion about spiritual authority in the various expressions of Christianity and Judaism. He takes the reader through some surprising history that leads to some obvious conclusions.

None Greater than John

What does Jesus mean when he talks about the least and the greatest in the kingdom of heaven? Is the worst Christian really better than the best Jew? If there is no prophet greater than John, where does that leave Jesus in the heirarchy of prophets? Toby Janicki examines these ideas from a first-century Jewish perspective and clears up many obscurities and misconceptions about these often-misunderstood words.

Nicodemus is an obsure character in the New Testament. Who was he and why did he meet secretly with the Master and question him? D. Thomas Lancaster brings to life the mystery behind the man from talmudic lore and tells a little-known miracle story of Nicodemus' faith.

Of Angels and Beasts

God created humans a little lower than the angels. This makes us unique in the universe. Suspended between beasts below and angels above, humanity has charactaristics of both. Jeremiah Michael reminds us that we can choose to cultivate the qualities of one or the other.

Miracles of Zion: The Burma Road

During Israel's War of Independence in 1948, Jerusalem fell under siege from hostile Arab forces that controlled the high ground above roads leading into the city. Supplies of food and ammunition were cut off and severe shortages ensued. The miracle of the Burma Road is an inspiring story about God's protection and provision for the Jewish people during a dark time.

Shayna Michael introduces us to Larry and Bess Herzakow, founders of Beit Rachamim, a ministry created to bring healing and hope to Israel through service-oriented short-term mission trips.

Fasting is difficult for children to understand. Tikvah Michael shares insights into making this mitzvah meaningful to the younger generation and answers some questions about the reasons for giving it a try in our own lives.

There are a lot of trees mentioned in the Bible. There was one in particular that has a big question mark surrounding it. Try to solve the mystery!

K.J. Kruger shares the poignant story of a daughter who reluctantly went to serve in the IDF and found that attitude can change the whole world.