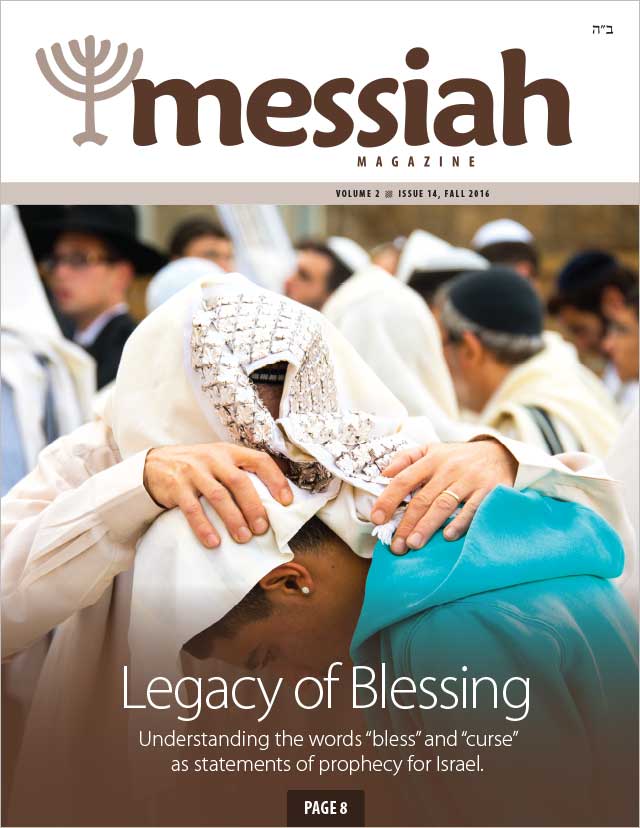 A new section in the magazine where we do interviews with travelers coming to Israel. This month we have visitors from Montana and Georgia.

Come with us to ancient Shiloh in this visual tour of the first location of the Tabernacle in Israel.

Replacing Replacement Theology: Under the Blessing

Are the Jewish people under God’s blessing or under his curse? Boaz Michael explores common theological assumptions regarding the relationship that God has with Israel and brings clarity to the discussion about blessings and curses in Deuteronomy 28-30.

According to some very loud voices in the world today, the Jewish people never had a claim to the physical land of Israel. Reuven Glasser points to indisputable evidence that the opposite is true.

The Jewish Jesus: The Carpenter of Nazareth

D. Thomas Lancaster takes us on a visit to first-century Nazareth and presents a glimpse of what everyday life was like when Jesus worked as a carpenter in the small village. He also brings into prespective the family dynamics and tensions of relationships between Jesus and the people with whom he grew up.

Blessed Are the Peacemakers

In a section titled "People Like Us" we are introduced to Naomi Miller, a Messianic Jew who is an IDF soldier working to build a positive relationship between the Israeli Army and the Arab people living in Israel.

Jeremiah Michael delves into the complex world of Jewish traditions surrounding the mealtime in an observant Jewish home. He provides answers to some of the questions people have but were always afraid to ask.

In this article by Shayna Michael the truth about the social media culture is discussed and she presents a challenge to ditch electronics even for a short time to appreciate the real world around us.

A Bible from Heaven

The next installment in the "Miracles of Zion" section tells the account of how a Bible-believing British war hero's testimony gave hope and encouragement to desperate Jewish forces defending the small outpost of Ramot Naftali from the Arabs in the War for Independence.